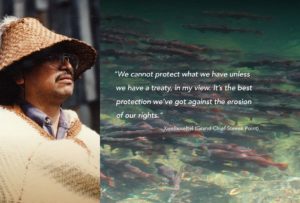 Stó:lō Xwexwilmexw Treaty Association, Government of Canada and Province of British Columbia signed an agreement yesterday that supports new and innovative approaches to modern treaty negotiations in B.C., and advances them to the final phase of treaty negotiations.

A treaty negotiations Memorandum of Understanding was signed at a ceremony in the Leq’á:mel community by the Chiefs from the six First Nations of the Stó:lō Xwexwilmexw Treaty Association (SXTA) and ministers from the provincial and federal governments.

The new agreement commits to a rights-recognition approach for a treaty agreement, consistent with the United Nations Declaration on the Rights of Indigenous Peoples.

The new approach explicitly recognizes that Aboriginal rights are inherent and cannot be extinguished or surrendered. It also shifts away from seeking a full and final settlement. Instead, this new approach builds a collaborative and predictable ongoing government-to-government relationship that can adapt to changing circumstances over time, as policies evolve or new rights are established by the courts, for example.

Under this approach, Canada, B.C. and the SXTA have agreed to develop a “core” treaty together. Key elements, such as the constitutional relationship, self-government, land ownership, and jurisdiction, would be set out in a constitutionally protected core treaty. But administrative and operational policy matters, such as program delivery and government administration, would be included in supplementary agreements, which are more easily amended than current treaties. Some topics may be concluded at a later date, as part of a living document.

Working collaboratively and developing new approaches to reach agreements is a key part of achieving reconciliation with Indigenous people in Canada. The MOU puts into practice innovations that flow from federal and provincial government commitments to relationships with Indigenous peoples based on respect and recognition, and guided by the United Nations Declaration on the Rights of Indigenous People, the Truth and Reconciliation Commission’s calls-to-action, and case law.

“Our goal has been to get out from under the Indian Act and to assert our lawmaking authority on S’ólh Téméxw, our land. We do this today for our children tomorrow. Our Stó:lō communities are pleased to be entering into final negotiations on this ground-breaking treaty.”

“This Memorandum of Understanding is the result of years of hard work on the part of the Stó:lō Xwexwilmexw Treaty Association, with the governments of Canada and British Columbia. This is key milestone towards a treaty that is consistent with Canada’s commitment to UNDRIP, and to the recognition and affirmation of Indigenous Rights.”

“This new partnership with the SXTA launches a fundamentally new approach to negotiating a treaty, one that better addresses inherent Aboriginal rights and self-determination. Our government is serious about creating real change and developing treaties that support lasting reconciliation and lead to healthy and prosperous First Nations communities, for the benefit of all British Columbians.”

Celeste Haldane, Chief Commissioner of the BC Treaty Commission –

“With the signing of this Memorandum of Understanding, Stó:lō Xwexwilmexw Treaty Association, Canada, and BC are advancing their nation-to-nation relationship and innovative approaches to treaty negotiations. The BC treaty negotiations process is proving to be the best nation-building opportunity for Indigenous peoples in the country through Indigenous rights recognition.”