YOU WILL RETAIN ALL EXISTING TAX EXEMPTIONS UNDER TREATY!

We will retain existing tax exemptions and members will not pay property tax on treaty lands. These fundamental principles, which have been an essential part of our Stó:lō Xwexwílmexw treaty negotiations are now a certainty. On July 22, the Minister of Crown Indigenous Relations, Marc Millar announced that Canada is changing its approach to phasing out section 87 of the Indian Act as a requirement of modern treaties. This means that our current exemptions for taxes on our reserve lands and future treaty lands will remain.

“As the Stó:lō Xwexwílmexw negotiators have always said, our people deserve to maintain existing tax exemptions even after we ratify a nation-to-nation agreement with the Federal and Provincial Governments,” said Stó:lō Xwexwílmexw Government President and Interim CEO Chief Maureen Chapman.

According to the Federal Government announcement: “Tax exemptions for First Nations property situated on reserves have existed since before Confederation to protect reserve property. These changes bring an end to the era of First Nations community members having to trade their exemption from non-Indigenous government taxation in order to advance self-determination.”

The Stó:lō Xwexwílmexw Government negotiators had a significant role to play in advocating for this change to modern treaty making, as we know that tax exemptions are of great benefit to our people.

“We hope that this change to the federal stance on tax exemptions helps remove any barriers or concerns that our community members might have had about governing ourselves and entering into a government-to-government relationship with the other governing bodies in Canada,” said Stó:lō Xwexwílmexw Government In-house Legal Counsel Grand Chief Steven Point. “We have come a long way in our work together and look forward to taking back our jurisdiction over our lands.” 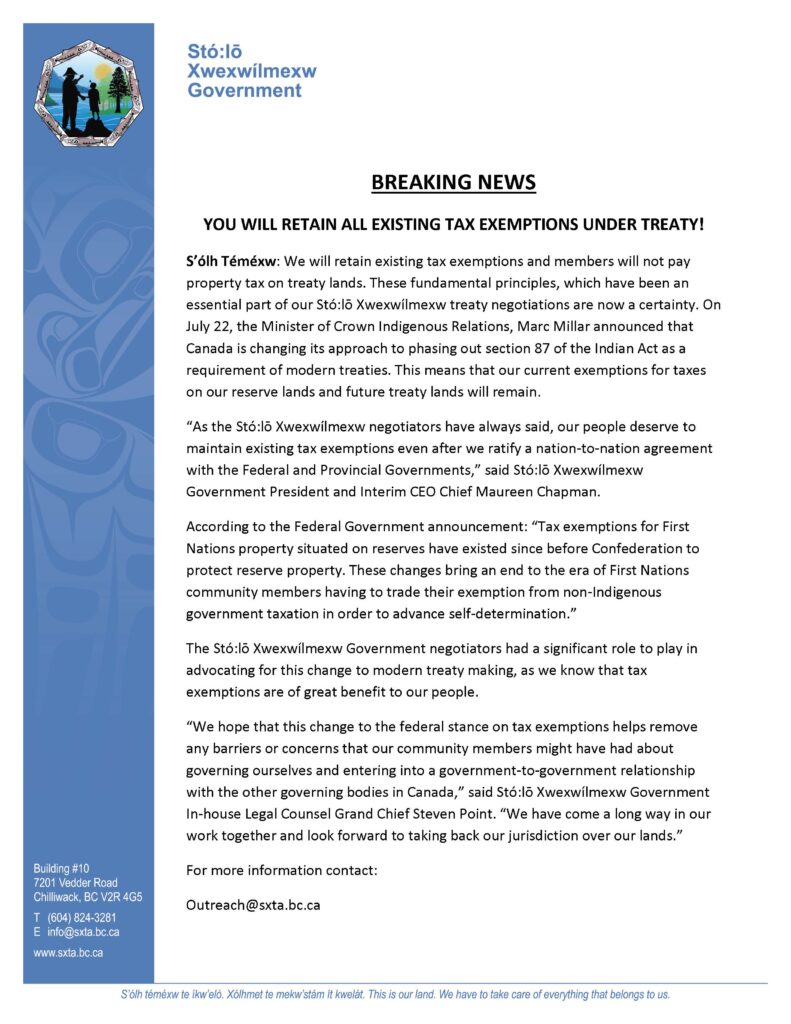